I recently had the honor of joining a long list of talented cartoonists interviewed by David!  Cartoonist Survey #254 can be found here:

In addition to scores of interviews with names you'll actually recognize he's got a lot of fun, informative posts on the nuts and bolts of cartooning.  So grab a comfy chair and a nice beverage and be prepared spend some time getting lost in his archives.

Big thanks also to my buddy Bill White for pointing me to David's blog.  Bill's a "Cartoonist's Cartoonist" - evidence of which may be found over at his fab site: 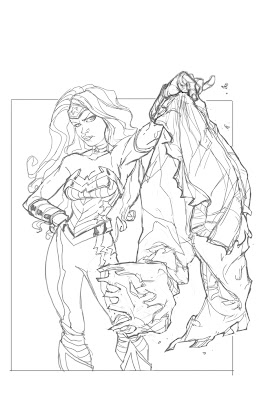 Thought I'd post a process piece - pencils for a Wonder Woman (52) piece for the Third Rail Design Lab forum.  Inks and colors to follow . . .
Posted by John F at 8:40 PM